It’s not their bloody wedding

Crikey has an interesting post today about how marriages could, technically, be annulled if the celebrant didn’t precisely say what they’re ordered to say under the Marriage Act. If, for example, vows were incorrectly phrased as questions rather than declarations – the couple need to actually say what they’re promising, not just “I do” – then, although unlikely, it is possible that a marriage could be considered invalid. 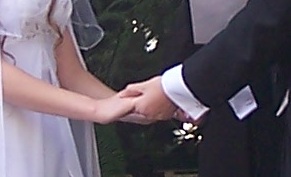 Isn’t this a lovely moment? Time to sully it with some ancient bigotry…

And then there’s the monitum, which is the part that annoyed me most when I got married. That’s the section that John Howard changed in 2004 to turn every wedding ceremony into a piece of nasty discriminatory right-wing homophobic propaganda, when every wedding celebrant in every wedding around the country is forced to declare:

“Marriage, according to law in Australia, is the union of a man and a woman to the exclusion of all others, voluntarily entered into for life.”

At ours we added the words “or two people” after the word “woman” in the above, but it seems that nowadays that might be considered insufficient. (Doesn’t matter now, my dear internet stalking friends whose ears just pricked up – we’re long since divorced.)

But it’s still a revolting piece of propaganda that I want no part in repeating, and to be honest it’s a major disincentive against getting married again before it’s fixed.

Nonetheless, I’m considering what else could be done.

I’m thinking that the Act doesn’t prevent us from preceding or succeeding the offensive paragraph with a paragraph of our own. Perhaps one warning guests that the next paragraph is John Howard speaking from beyond the political grave, that it represents a temporary definition that will before too long be replaced with one a vast majority of us would recognise as just and fair. That the discrimination it enforces will not last, regardless of how many weddings are tainted with nasty politics in the meantime. That we apologise for subjecting them to it because we’re too impatient to wait to get married until it’s fixed.

John Howard is coming to your wedding ceremony… and he wants his say.

And then when the compulsory bigotry is over, say “…and now back to the part of the day that’s about love”.

Or, alternatively, I don’t think the Act prohibits the celebrant from saying the line as follows:

“Marriage, according to the law in Australia as altered by John Howard in 2004 completely contrary to the general advancement of equality around the world, is (and we quote directly as the Act now forces us to do) “the union of a man and a woman” – despite there being no rational reason to limit it in such a discriminatory way – to the exclusion of all others, voluntarily entered into for life.”

All technically true, and it’s still “words to the efffect” that that is the present law. It just doesn’t present it as if that’s as it should be, as if we agree with it.

Damn that Howard, and damn his cowardly successors. Damn every single member of the 2004 parliament who voted for that legislation.

How dare they invite themselves to our weddings.

9 responses to “It’s not their bloody wedding”