Alright – at this stage we have a provisional result, in which neither big party can form government in the lower house by themselves, and in which they’ll need the support of independents to command a majority.

Is this a good or a bad outcome? 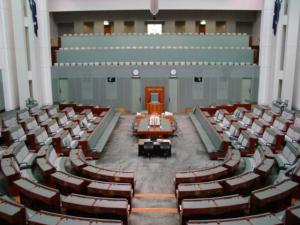 Parliament: where issues are supposed to be decided, rather than in major party backrooms. Welcome back democracy!

In fact, as far as I can see the biggest problem of this result is the disproportionate power the local independents will have over the rest of us. Unlike, say, the lone Greens lower house MP, who’s there from one electorate but in effect represents the 14% of Australians who voted Greens, the other independents represent no more than a single electorate and can’t be expected to give a damn about anything besides how much the rest of us are willing to offer them to have a functioning government.

This would be easily remedied with multi-member electorates in the lower house. Like the Senate, but not unfairly distributed amongst the States so a voter in a small state has more of a say than a voter in a big one. We leave the Senate as the States’ house, and we divide the current House of Representatives into, say, thirty five-member electorates with equal numbers of voters. Or fifteen ten-member electorates. Then a party on 10% of the vote will have a reasonable chance of getting 10% of the seats, rather than zero. Then parliament would roughly match the opinions of the Australian electorate, rather than an unrepresentative duopoly.

Expect the beneficiaries of the status quo to stand against that, of course – they like getting more seats than their vote justifies – but it would (a) be real democracy and (b) resolve the problem we’re about to have. Which is not “minority government” – it’s a parliament held hostage to a few local electorates at the cost of the rest of us.

That said, I’ve been pretty impressed by the attitude of some of those independents, so we’ll see.

UPDATE: Two other “pros”: Terry McCrann thinks “no good can come of this” and Andrew Bolt describes the next Senate as “destructive”. Which, given that the two of them live in bizarro world where good is “evil” and the duopoly the country has finally realised serves none of us is something to be preserved, is a fairly ringing endorsement. Good work, Australia.