I think this is the worst thing I’ve ever heard Jon Stewart say:

Afghanistan, we went in there because they were the guys that were holding Osama Bin Laden and Al Qaeda and allowing them to do it. So, I understand we go in there and bomb them. I don’t understand this whole idea that when you have a war, then you have to go back after the war and be like “okay, the war is over, what do you want fixed?” It doesn’t seem to make sense to me any more that this is our strategy.

…At a certain point, you know what? You throw up your hands and you go – you don’t want democracy? F*ck it, don’t take it. You don’t want to be American, f*ck it, go settle your own state.

Jon, it’s not the Afghan people’s fault that they’ve never had a chance to vote in a genuinely democratic election, or that after their previous oppressive government was destroyed (the Afghan people were also not responsible for what the Taliban – sorry, the people sheltered by the Taliban – did to the US) it was simply replaced by a group of crooks who were completely unable to restore stability. And what did the US forces do in the meantime? Concentrate on fighting their own war, stuff the Afghan people who were in the way.

What’s with the sense of aggrievement? For what precisely are the Afghan people supposed to be grateful to the US?

Saying stuff ’em, let ’em continue to be oppressed by the people who are destroying the country now (some of whom the US put in charge), is like saying let’s just kill the lot of them for the crimes of a few. Oh, like you and Aasif joked minutes earlier. 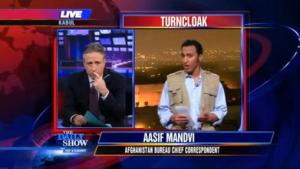 Seriously, I don’t know where Stewart’s empathy went, but when one of the most self-aware and reasonable Americans in the media can come out with something so contemptibly callous (and be cheered by his supposedly liberal audience), it’s a sad indictment on sentiments in that country.

It’s particularly worrying on the day that the results of a decade of inculcating those attitudes in the young become appallingly apparent.