How did the cruise control disable the brakes?

A routine road trip became half an hour of horror for a Melbourne man this afternoon when his four-wheel-drive’s cruise control malfunctioned on the Eastern Freeway. 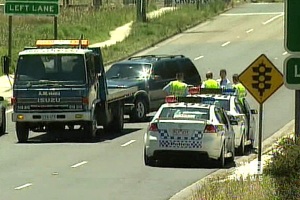 In a scene reminiscent of the blockbuster thriller Speed, the Ford Explorer’s cruise control jammed on at 80km/h… Senior Constable Adam West said the man attempted to stop the four-wheel-drive by braking, knocking the four-wheel-drive out of gear or removing the keys – all to no avail.

You’d have thought Adam West would’ve had some way of saving the distressed driver.