Why won’t anyone think of the corporate dinosaurs that malevolently dominated music last century?

Are you one of that tiny, tiny minority of Australians who occasionally downloads music from the internet? If so, you’re a terrible, terrible person and you’re making artists starve. You monster. Check out this new chart of how badly recording companies are doing in the awful new world you’ve created: 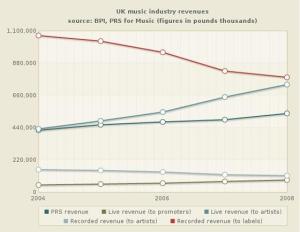 Okay, so artists seem to actually be doing better, despite – or, more likely, because of – your villainy. But who cares about that? Look at the only line that’s important – the recording companies’ revenues. See what your contempt for their archaic, artist-exploiting, consumer-screwing, grandmother-suing business model has wrought? If you keep this up, eventually recording studios will just be a service competing with each other for artists’ custom, and the vast majority of money spent by consumers on their music will end up in their pockets instead of those of the middle-men.

What a horrible future. You make me sick.

And what makes it worse is that the only people actively fighting it are the hugely wealthy recording companies and the politicians they’ve bribed. Those poor corporate dinosaurs are utterly doomed, if our governments in any way represent their citizens’ interests and can resist corruptly doing what the lobbyists are trying to pay them for.

Let’s hope that’s not the case.

Please, go back to buying music from them. It’s only by contributing to their coffers that you can help fund their campaign to stop artists taking over.

4 responses to “Why won’t anyone think of the corporate dinosaurs that malevolently dominated music last century?”